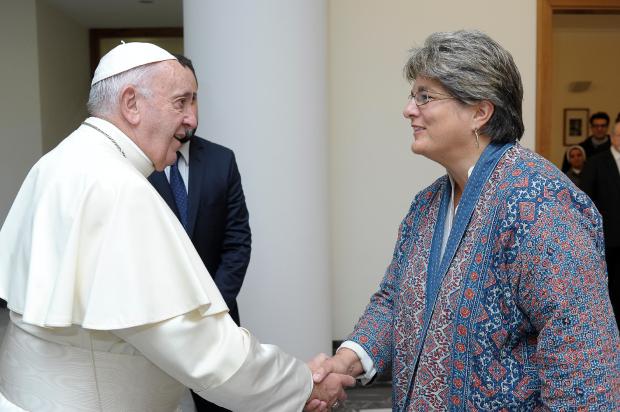 Jayne  has presented Pope Francis with evidence of the harm caused by so-called “conversion therapy”.

Jayne attended morning mass at Santa Marta, Rome in the grounds of the Vatican on November 14th 2019, after which she presented His Holiness with a copy of her memoir, Just Love, and the 2018 Faith & Sexuality Survey. 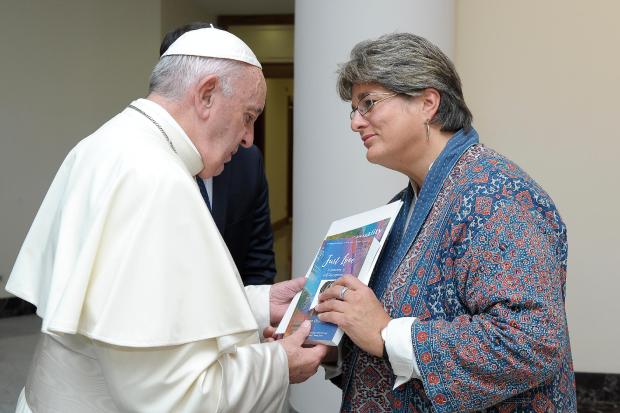 Sharing that she had grown up in a Church that told her “she could never be a wife, a mother or a grandmother” she explained that was why she had attempted to make herself straight by going through various forms of so-called “conversion therapy”, as detailed in her book.  She continued that her Foundation’s research showed the impact on hundreds of others, many of whom had attempted suicide.  She said that she prayed that all would know they are precious children of God and acceptable just as they are.

The Pope responded by saying “Please pray for me as I pray for you”.

Jayne was introduced to His Holiness by Roberto Manuel Carles, a prominent Argentinian lawyer who specialises in criminal lawyer and who has been at the forefront of the international campaign to abolish the death penalty.

She is an elected member of General Synod for the Church of England, on which she has served since 2015, and was also a founding member of the Archbishops’ Council from 1999-2004.  In March 2019 she was appointed to the government’s LGBT Advisory Panel.  In 2017 she led a debate on the dangers of Conversion Therapy within the Church of England, which resulted in them calling on the government to ban it.

Her journey incorporates a range of powerful faith encounters with people across the world, from Argentina to Moscow and from the jungles of Burma to the White House. She gives an inside view of what it was to be a founding member of the Church of England’s Archbishops’ Council to working alongside international figures such as Tony Blair and the Vicar of Baghdad. At times both raw and shocking, she explains what led her to be hospitalized after seeking healing for her sexuality before becoming ostracised by many Christians after she finally deciding she had no choice but to come out.

‘A heartfelt plea for love in all its glory, from a brave woman on her journey from despair to hope. Jayne’s story is proof that sometimes the hardest paths can lead to wonderful places.’

‘This is not a comfortable book. It is Jayne’s personal struggle to be true to herself and to God. Indeed you cannot be true to God if you cannot be true to and about yourself. It is also her search for love – spiritual, emotional and physical. Jayne bares her soul in pursuit of a more just and honest world – and Church.’

‘Just Love is a compelling story. But it’s not just Jayne’s story; it is a call to a journey for the entire Church as we respond to Jayne’s love for God and passion to serve the Church. Whatever your views on human sexuality, it is a journey we must all take together.’

The survey revealed the high level of mental health issues reported amongst people who have attempted changing their sexual orientation, with many sharing they have attempted suicide or had suicidal thoughts.  Over half said they first attempted to change whilst they were 18 or under with many stating they were influenced by their religious leader.  22 people said they had been forced to undergo sexual activity with someone of the opposite gender.  These attempts were reported as being overwhelmingly unsuccessful, with the primary motivations given for attempting to change relating to either religious beliefs or internationalised homophobia.